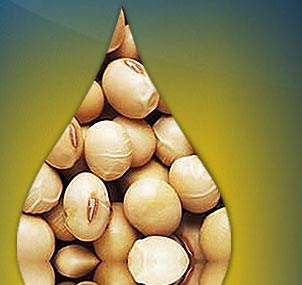 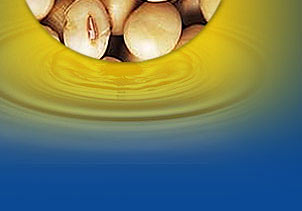 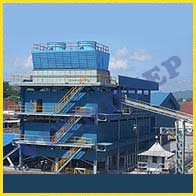 The design of OILTEK Extractor is such that its speed is adjusted automatically depending upon the capacity being processed by means of level controllers coupled with variable frequency drive to its motor.

The Extractor chamber consists of a number of solvent sprayers which in uniform, sprays the solvent over the entire bed of raw material. The length and breadth is designed to give sufficient time for intimate contact, penetration and percolation of solvent into raw material. The Extractor is also designed with light and sight viewing glasses to view the spray distribution.

The material coming out of the spraying chamber is de-oiled material with solvent which is to be recovered in the Desolventising section where it is transported by means of a special OILTEK Solvent Seal Conveyor . The mixture of the oil and solvent called “Miscella” is collected in the Miscella tank from where it is pumped to distillation section.
Desolventising
The de-oiled meal contains about 20% - 35% solvent by weight depending on the material. The meal must be desolventised.

The basic principal involved in Desolventation is direct heating of material with steam to a temperature well above boiling point of the solvent and thus ensuring no solvent is left over in the material. Toasting is also heating the material with direct and indirect steam to remove the remaining hexane and as well toast the meal.

Vapours of solvent are then sent to OILTEK Condensers via OILTEK Scrubber where the solvent vapour is washed, and particulars of fines are not carried to the condensers.

The OILTEK Air seals are provided at inlet and outlet of OILTEK Desolventisers to ensure an air tight arrangement. This is essential to keep the solvent loss figure down. The de-oiled and de-solventised meal thus obtained is then transported to Bagging Section.

Veendeep takes great care in designing and sizing the Desolventiser as to minimize the steam and power consumption. 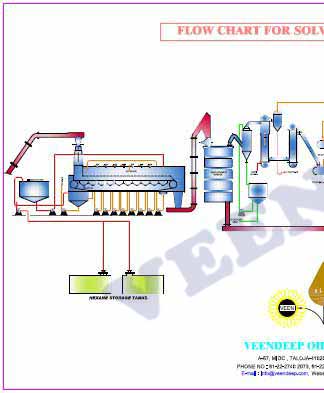 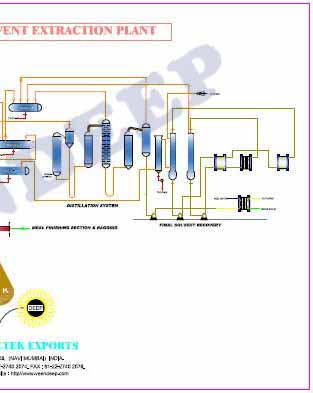 Click Here to Enlarge View
Distillation
Mixture of oil and solvent obtained in the OILTEK Extractor is known as ‘miscella’ and it normally contains 12%-35% depending on the material used. During distillation, solvent evaporates first due to its low boiling point (64 to 67 deg C) thus leaving clean oil behind.

Distillation is performed in three stages under vacuum to ensure that no oxygen is present when the oil is heated to a high temperature.

Presence of Oxygen will exercise the oil, making it unsuitable. First evaporation takes place in Economizer and concentrates in the Evaporator, Pre Heater and Final Heater. After each step of evaporation the oil passes through Oil Vapour Separator, which separates the evaporated vapour leaving practically only oil behind. This oil is further treated with open steam in OILTEK Stripper and then finally dried in OILTEK Drier to ensure that no solvent finds its way along with the oil. The oil is finally cooled in OILTEK Oil Cooler to below 60° C before sending it to storage.

The solvent vapours thus produced by passing through OILTEK Oil Vapor Separator to separate out any oil particles trapped with solvent vapors and are then passed on to OILTEK Condenser for condensation.
Condensation
Solvent vapours are formed both in Desolventisation Section as well as in Distillation Section and these are to be condensed. Special floating head type OILTEK Condensers are provided. The floating head type OILTEK Condensers help in quick and easy removal of tubular bundles for periodical cleaning. Adequate surface area have been provided for OILTEK condensers for complete condensation of solvent vapour.
Final Solvent Recovery
In spite of providing adequate Condensers, the air that is being injected out of the system contains traces of solvent. In order to recover the traces, a special final vent air stripping column has been provided. It comprises of a main OILTEK Absorber to give a large surface of contact. It is partly filled with mineral oil which is a suitable absorbing media that absorbs the solvent vapours from the air. The oil and solvent mixture is stripped to recover the solvent.